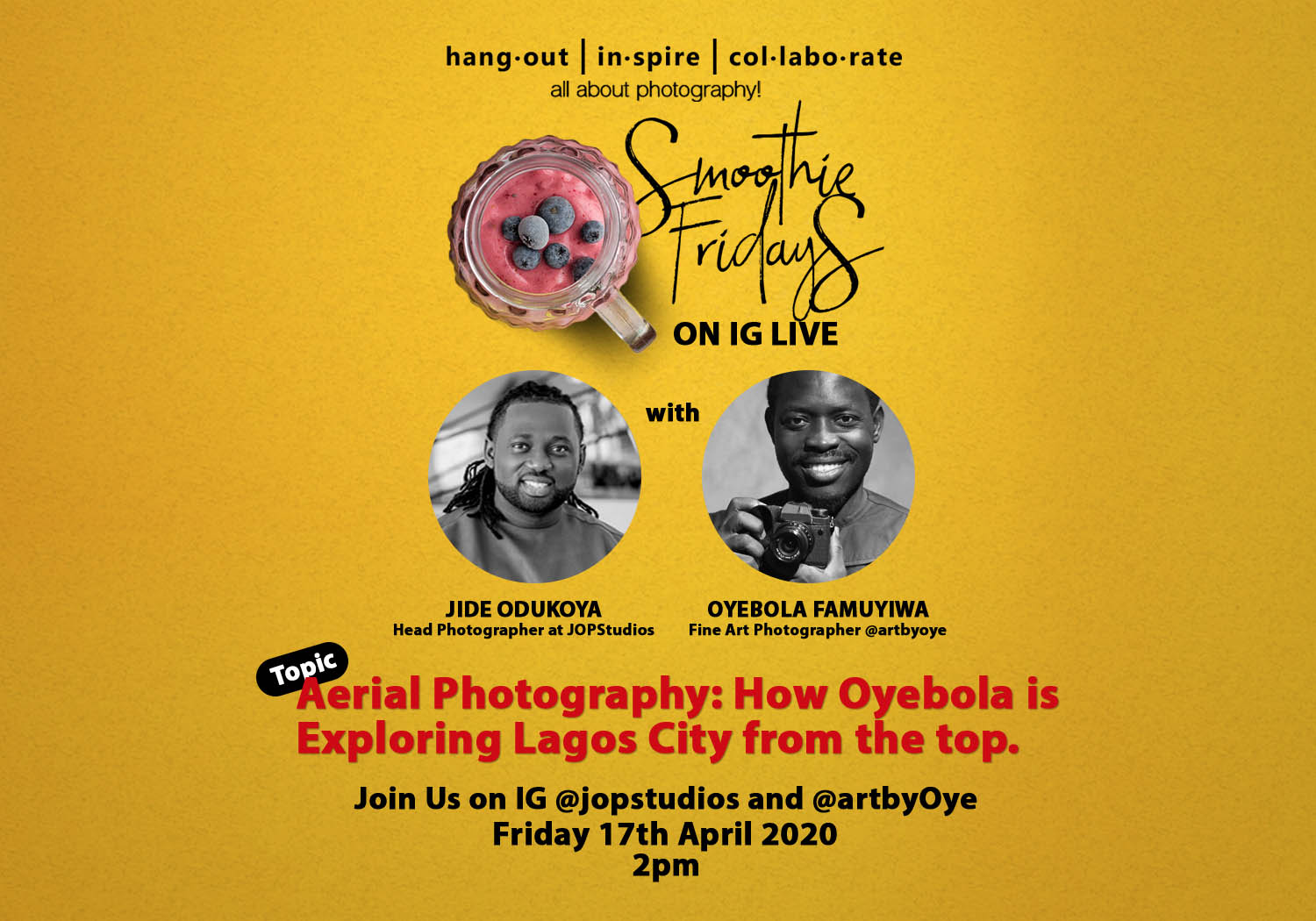 We had another #SmoothieFriday IG Live Session with the amazing fine-art photographer, Oyebola Famuyiwa.

The topic was on Aerial photography: How Oyebola @artbyoye is exploring Lagos City from the top.

Interestingly we learnt that Oyebola’s inspiration for aerial photography started from his younger years when he wanted to be a pilot. His uncle would give him books on aviation to read. As the years went by, he forgot about it but picked up the interest again in the form of aerial photography.

When asked whether he moved from wedding photography to aerial photography, he mentioned that he does not want to box himself into only one area of photography or business. He’s all about finding value and creating it. He thinks of himself as a business man, and not just a photographer.

@ArtbyOye explained to us that for his aerial photography, where he takes off is very crucial. Sometimes, he employs the use of Goggle Earth to map out how a place looks before he flies his drone to photograph that place.

He also mentioned that his biggest challenge, apart from inadequate regulations, is birds. He however explained how he maneuvers birds that are very territorial, by flying his drone straight up or left-right.

In Nigeria, there is a clamp-down on drone usage because the Government is not ready to set down regulations or create a data-base of drone users. So what Government officials resort in doing is just to seize drones.

When asked how he has been taking powerful pictures of Lagos during the lockdown he explained to us his secret! Due to the advent of Covid-19 and our inability to move everywhere, Oyebola been flying his drone from his residence to neighboring communities like Stadium in Surulere, Idumota, etc.

The amazing part is that the drone would return to its initial take-off point (his residence )!He mentioned that the drone allows you to set that feature so that it will return to where it took off from. He uses any opportunity he has to take pictures with his drone.

He explained that drone prices range from $30 and above depending on the size and the features offered by the drone. He also mentioned that one needs training if they want to fly a drone internationally and that he offers tutoring for those interested in learning.

When asked how he met with Tony Elumelu @tonyoelumelu of @Ubagroup, he explained the importance of tagging his work and other people reposting it. The powerful image got shared a lot and @tonyoelumelu got tagged in the image all those times. The Communications Head at UBA then reposted the image, reached out to Oyebola and that’s how he met the iconic Entrepreneur!

His advise to those interested in getting drones is this: Getting a drone is not enough. You have to be willing to deal with all that comes with it.

He concluded with a powerful saying: “IF YOU WANT TO GET THE ATTENTION OF THE PEOPLE INSIDE, YOU WILL HAVE TO START FROM OUTSIDE.”

It was indeed a very powerful session and we’re anticipating our next #SmothieFriday next week! See you all there!